When Cara Bernal read a story to her kindergarten class on a recent winter day, she ignored a crying girl, another one wandering around the room and a boy laying his head down on his desk. 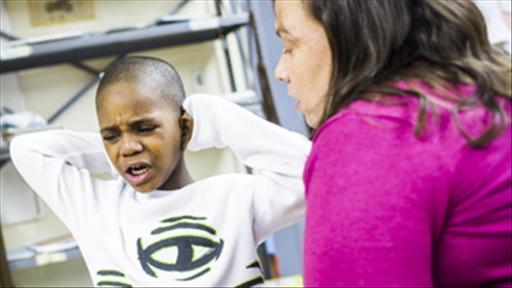 Instead, she called attention to the one student who was on task, as she has been trained to do by psychologists. “Randy is looking at the story,” said Ms. Bernal, a longtime teacher at the League School in Brooklyn.

When the other students behave as she wants, she praises their conduct as well. “Good raising your hand,” she said when one boy stopped tapping her on the shoulder and instead returned to his chair to get her attention.
Such “active ignoring” and other techniques Ms. Bernal uses are part of a treatment known as teacher-child interaction therapy. Its goal is to improve educators’ ability to reduce disruptive classroom behaviors so that they can focus on teaching.

The TCIT techniques are based on a similar program for parents and children, which has been demonstrated to work in reducing kids’ misbehavior. Psychologists are studying whether the treatment can be adapted to group settings in school, even if parents aren’t using the same practices at home. They are testing TCIT and related programs in schools around the country, including populations where children have known behavioral issues, as well as in mainstream classrooms.

The principles of TCIT, like its parent-training cousin, PCIT, sound simple enough: Teachers need to build a strong relationship with students so they can work more effectively with them.

To do that, teachers have to become alert to positive behavior, praising students for specific actions while ignoring misbehavior, which is generally more noticeable. The goal is for students to hear at least three positive comments for each negative one.

Just as important to TCIT is teaching children how to calm themselves, and establishing limits and consistent consequences for misbehavior. Discipline is only used to give children time to compose themselves.

For instance, if a student calls out an answer instead of raising his hand, teachers traditionally might say, “We don’t call out,” or they may let it slide and take his answer, said Dr. Fernandez. Using TCIT, teachers would instead ignore the outburst but call on and praise the student when he does raise his hand.

“You have to actively wait for the kid to resume appropriate behavior and catch it,” said Dr. Fernandez. “Otherwise they know they’re more likely to get the reaction when they do the [disruptive] behavior.”

If students are truly unruly or dangerous, rather than trying to engage in long discussions or ask them why they are acting out, they are asked to go to a corner in the classroom or taken to a quiet room until they calm down. When they can sit quietly, they’re told, they can return to class. This way, students know what to expect when they are disciplined and know they have control over their return to the classroom, but they aren’t given extra attention or shamed for their behavior.

In practice, this means making quick decisions about what to ignore, which can be challenging when teaching. And questions remain about whether TCIT can be widely used, since it involves intense practice and coaching sessions between the teacher and a psychologist trained in the techniques.

At the League School, a 130-student school and day-treatment program for children who have a psychiatric diagnosis and a demonstrated history of disruptive or aggressive behaviors, teachers have been trained in the techniques by psychologists at the Child Mind Institute over the last three years.

Principal Stephanie Golub reached out to the Institute several years ago when she realized that her students were being pulled out of the classroom for disruptive behaviors an astronomical 2,200 times per school year, she said. The hallways were lined with children who supposedly couldn’t remain in class. “What we needed was a teacher-education intervention program,” said Ms. Golub.

Four times a week for the better part of a year, Child Mind Institute psychologist Samantha Miller coached League School teachers on TCIT by following them around and discreetly whispering guidance. Teachers also practiced on their own time.

Since the implementation of TCIT in some League classrooms, disruptive incidents dropped 32% to 1,500 the last school year, said Ms. Golub.

Ignoring bad behavior was the hardest part of applying the techniques, said first-grade teacher Tara Irizarry. One student used to scream in her face when he was upset. By ignoring his tantrums and reinforcing quieter speech, Ms. Irizarry taught him to whisper in her ear when he wanted to talk to her. “Every behavior has a meaning,” Ms. Irizarry said. “It takes time. It’s not an easy fix.”

There are moments when Ms. Bernal feels she is making progress, too. On the playground one morning, one boy was standing precariously on a swing, saying he was going to jump.

Ms. Bernal had to make a quick safety decision—namely that the boy wasn’t in immediate danger—and then ignore the antics. “I know if I say ‘don’t jump,’ he’ll do it,” she said.

Instead, she praised the other children for sitting and swinging. The boy quickly sat down as well. “Nice getting off safely,” she said.

A version of this article appeared January 15, 2013, on page D2 in the U.S. edition of The Wall Street Journal, with the headline: Teaching Kids to Give Themselves a Timeout.

Ignore the Outbursts, Play Up the Positive

Teachers at the League School in Brooklyn, N.Y., are being trained to use a practice called teacher-child interaction therapy.

Here’s a look at some of the ideas behind it: 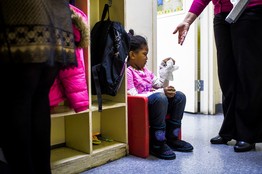 Bryan Derballa for The Wall Street JournalSelf-Calming: Students like 5-year-old Jasmin, above, settle themselves after a tantrum with techniques such as sitting in a designated chair. 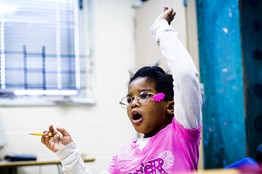 Bryan Derballa for The Wall Street JournalPraise for Good Conduct: When Jasmin raises her hand in class, it elicits a specific compliment, reinforcing the desired behavior. 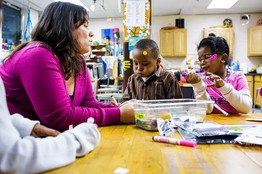 Bryan Derballa for The Wall Street JournalPositive Attention: Cara Bernal, left, with Randy, 5, and Jasmin, focuses on good behavior. The aim: three positive comments for each negative one. 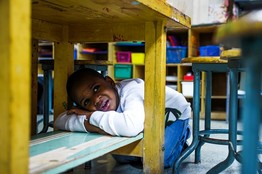 Bryan Derballa for The Wall Street JournalActive Ignoring: When Christian, 5, cries under a table, such outbursts and other unruly behavior get ignored instead of called out