How Autism Is Different in Girls vs. Boys
By SHIRLEY S. WANG 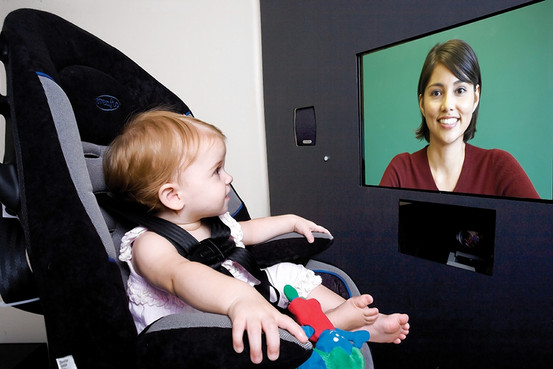 Why do boys get diagnosed with autism four times as often as girls?

New research, including some of the latest data from the International Society for Autism Research annual conference last week, addresses this question, one of the biggest mysteries in this field. A growing consensus is arguing that sex differences exist in genetic susceptibility, brain development and social learning in autism—and they are meaningful to our understanding of the disorder and how it will be treated.

Yale University researchers presented results showing that being female appears to provide genetic protection against autism. Meanwhile, scientists at Emory University showed in preliminary work that boys and girls with autism learn social information differently, which leads to divergent success in interactions with other people. 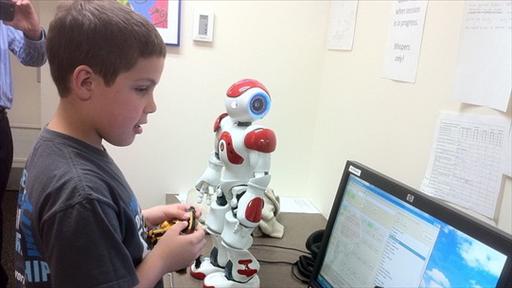 A 2-foot-tall robot therapist may help kids with autism learn to be more social, according to an intriguing new study. Photo: Laura McGuire.

The new data, together with previously published studies, suggest that sex should be taken into account in diagnosing and in creating individualized treatment plans, according to experts.

Autism, a developmental disorder characterized by deficits in social skills and repetitive behaviors, affects more than 1% of the population. It has long been known to be diagnosed more often in boys.

Yet girls often appear to have more severe autism. The ratio, about four boys to every one girl overall, becomes even more lopsided when intelligence is taken into account. At higher intelligence levels, boys with autism often outnumber girls eight or 10 to one, say researchers.

Why this ratio exists and how much it is skewed by misdiagnosis or underdiagnosis in girls isn’t clear. More and more, however, scientists think the sex distribution is meaningful.

“It’s such an important biological clue—why do we have this excess in boys?” said Geraldine Dawson, the chief science officer of Autism Speaks, a research funding and advocacy group.

Sex differences in autism and related disorders were relatively ignored until recently and still aren’t well understood. The small number of girls who have the disorder meant that studies often didn’t include enough girls to be able to reliably examine sex differences. Often, girls were excluded from studies altogether.

Understanding sex differences is important to getting the right diagnosis and treatment, said Christopher Gillberg, a child and adolescent psychiatry professor at the University of Gothenburg in Sweden. Because experts’ understanding of the typical features of the condition is primarily based on research with boys, girls may be missed or misdiagnosed, he said. Some evidence suggests that girls are diagnosed, on average, later than boys.

In addition, the clinical picture for children with an autism-spectrum disorder is often complex. Most have other conditions as well, like attention-deficit hyperactivity disorders, sleep problems or epilepsy, which may affect their functioning, Dr. Gillberg said.

He and his colleagues evaluated 100 girls between the ages of 3 and 18 who had social or attention deficits. Forty-seven were diagnosed with autism. As well, 80% of those with autism also could be diagnosed with ADHD. Virtually all the girls had depression, anxiety and family relationship problems.

Understanding sex differences also has implications for elucidating the condition more broadly. Experts speculated that perhaps boys were somehow more vulnerable to autism because of, for instance, genes, hormones or different ways their brains are wired.

From a genetic standpoint, however, there is growing evidence that boys aren’t more susceptible to autism, but rather girls are more protected from it. Yale researchers added to this thinking with new findings presented last week in which they looked at the DNA of several thousand children with autism.

They found that girls actually had substantially more high-risk genetic mutations associated with autism than boys, on average twice as many. Yet, because girls develop autistic features less often, something about being female is protective against the condition, said Stephan Sanders, a postdoctoral fellow at Yale University who presented the work.

The Yale scientists then wondered if the males and females might actually be experiencing two distinct disorders at the genetic level. But further research led them to conclude that boys and girls appear to be suffering from the same ailment, Mr. Sanders said.

There is also early evidence that even though boys and girls may have the same condition, the way they process information could lead to different outcomes. For instance, studies of social learning, the core process that appears affected in children with autism-spectrum disorders, have found differences between the two sexes.

Kids with autism tend to look more at people’s mouths, while typically developing children look more at the eyes, Ami Klin, head of Emory University’s and Children’s Healthcare of Atlanta’s Marcus Autism Center, and others have found. The thinking was that eyes tend to provide a lot of social information, such as emotion or interest, and the kids with autism miss out on a lot of this information, which contributes to their social impairment in interactions with others.

But in new work, Marcus researchers are comparing sex differences in eye gaze in typically developing children and those with autism, and have been surprised by the findings. The scientists showed six film clips involving social interactions, like boys playing baseball or kids chatting, to 52 boys and 18 girls with autism as well as to 26 and 36 typically developing boys and girls, respectively. Using eye-tracking technology, they were able to capture where on the screen children looked during the entire clip.

Overall, both girls and boys with autism looked less often at the eyes compared with typically developing kids, consistent with previous studies. The amount of eye contact from the boys related directly to their overall level of social disability. Boys who looked less at the eyes were more socially disabled.

Girls with autism, however, showed the opposite pattern: Those who focused relatively more to the eyes tended to experience worse social disability, said Jennifer Moriuchi, an Emory psychology graduate student.

The team found significant differences in timing of when girls or boys would look at the eyes, suggesting they aren’t following the same cues.

The group is continuing with its work to understand these differences in engagement with the eyes, which highlights just how little is known about how autism manifests in girls, said Warren Jones, research head at the center.

“We tended to assume that boys and girls [with autism] do the same thing when they adjust to everyday life,” Dr. Klin said. “There’s emerging evidence that it’s to the contrary.”