The information can help you improve distance learning.  It can also help determine whether children needs compensatory education services from the school district when schools re-open.

Go to https://log.education using your smartphone.

This app is a collaboration between Massachusetts Advocates for Children,  Mass Families Organizing for Change Northeast, and Tallylab, LLC. If you have any questions about this log, or ways we can make it better, please contact jpino@massadvocates.org.

Abilities Expo, Boston, is the newest in a series of Abilities Expos that take place around the country and have been doing so since 1979. Abilities Expo Boston features an impressive line-up of exhibits, celebrities, workshops, events and activities to appeal to people of all ages with the full spectrum of disabilities—including physical, learning, developmental and sensory disabilities.

“It’s not just that we provide a forum that showcases essential  technology to bridge the gap between ability and disability,” said David Korse,  president and CEO of Abilities Expo. “The Expo is always new and exciting with  a host of all-inclusive, adaptive activities.”

“The Expo provides the community of  people with disabilities access to life-enhancing products, education,  resources and fun,” said Korse. “We can’t wait help people explore the possibilities and open their  eyes to all the things they can do.”

Online pre-registration is now closed. FREE registration will be onsite at Abilities Expo this Friday through Sunday.

Thank you very much for your interest in the Boston Abilities Expo on September 20-22, 2013. Our event team is already onsite at the Boston Convention & Exhibition Center, Hall C preparing to make this the best Abilities Expo yet.

Please come directly to the show this Friday, Saturday and/or Sunday where you can register for free and come right on in.

It’s going to be a great event! We look forward to meeting you in person!

It can identify faces as well as objects

It can be hard to find what you’re looking for at the supermarket — even harder when you’re blind.

But shopping recently got a lot easier for Karla Geagan, a legally blind 15-year-old from Wayne, Penn. She has been testing new technology from Visus Technology Inc., a Boston company that programs smartphones to identify people and objects.

“I can point at anything, no matter how far away, and it’ll tell me what it is,” said Geagan, “In the grocery store, I just point it to the food item, and I know instantly what it is.”

Geagan is one of nine middle-school students who have completed a two-week test of the Visus Visual Assist System, conducted by Carroll Center for the Blind in Newton and cosponsored by the cellphone carrier Verizon Wireless. 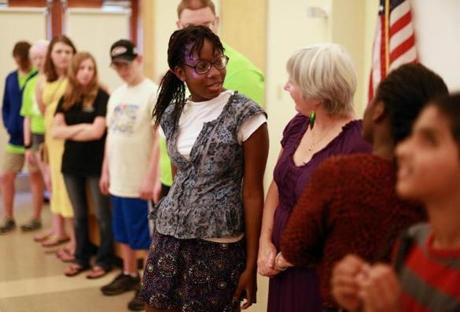 At Carroll Center for the Blind, students tried a new smartphone.

“It allows a blind or visually impaired person to utilize the speech capability of an Android phone, with the camera capability, to do a variety of visually related tasks,” said Brian Charlson, the Carroll Center’s director of technology.

“With roughly 15 million people that have some visual impairment in the United States . . . there’s a very significant market,” said McCormack, a graduate of the College of the Holy Cross in Worcester with a doctorate in biomolecular engineering from the University of California Santa Barbara.

The Visus system is set to go on sale early next year. Its $999 price tag will include a Galaxy S4 phone, a wireless Bluetooth earpiece, and a 4G wireless hot spot for sharing the phone’s 4G data service with other devices.

McCormack said the company hopes to offer a version for Apple Inc.’s iPhone by early 2015.

The Visus software comes with a host of visual aids. Geagan’s favorite feature identifies retail items by scanning them with the phone’s camera. The software consults a database of common retail products to identify the goods.

Another tester with limited eyesight, 15-year-old Kyle Quinnzaino of Everett, is a big fan of the phone’s magnification system, which uses the camera’s zoom lens to display enlarged images of hard-to-see items, like the Carroll Center’s cafeteria menu.

“Sometimes I couldn’t see it,” Quinnzaino said, “so I’d take out my phone so I’d know what we were having for lunch or dinner.”

The Visus program can be trained to identify faces, so a blind person who encounters a friend or colleague won’t have to guess at a name. Instead, he can scan the face with his phone. An electronic voice can announce the person’s name through a wireless Bluetooth earpiece.

Another Visus feature lets the user scan a large area with the camera to pinpoint objects containing text, such as signs or bulletin boards. The software can translate the text to speech and read it aloud. The phone also makes it easier for a blind person to find a restroom. It is programmed to recognize the standard symbols indicating a men’s room or women’s room and point them out to the user.

The software can even generate a map of the inside of a building. Using software licensed from a defense contractor, Visus can shoot a video as the user is guided through the building.

The next time the user visits the location, the software uses this video map to tell him how far to walk and when to turn left or right.

Karen Ross, the Carroll Center’s director of education services, noted that most blind or visually impaired youngsters attend the same schools as other kids, but their vision problems make it difficult to keep up and fit in. The Visus system could help change that, Ross said.

“It levels the playing field for those students so they can compete with their sighted peers,” Ross said.

The system could also make life easier for senior citizens whose vision is fading, or those who have trouble remembering names.

Hiawatha Bray can be reached at bray@globe.com.